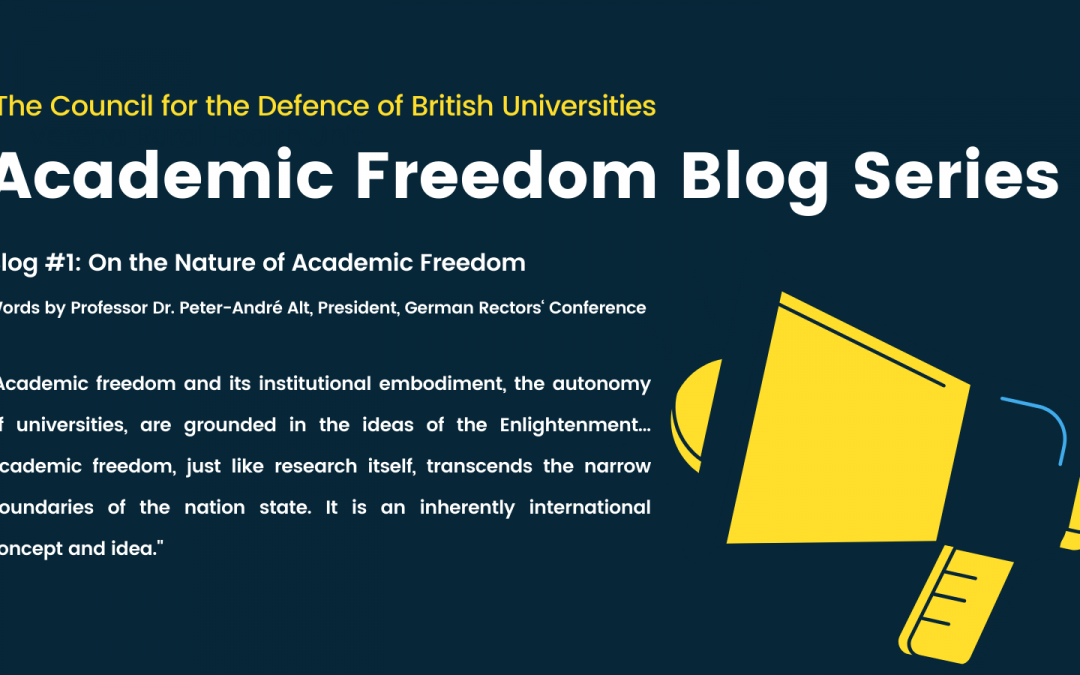 ‘On the Nature of Academic Freedom’

Kindly contributed by Professor Dr. Peter-André Alt, President of the German Rectors’ Conference. Adapted from a speech given at the CDBU AGM.

In early May, the German Rectors’ Conference published two statements. And although both are only brief statements, the symbolic significance of these two interventions cannot be overestimated. The first statement commemorates the 100th anniversary of the birthday of Sophie Scholl on May 9th, 1921. In February 1943, Sophie Scholl, then a 21-year-old student at the University of Munich, was executed after distributing anti-war leaflets at her university. In her fight for freedom and democracy, Sophie Scholl continues to be a role model for all members of German universities, and we do well to remember her and the Weiße Rose resistance group. The second HRK statement published only a day later, on May 10th, remembers the burning of books in more than 20 university cities across Germany in May 1933. The burning of books by students and professors represented the annihilation of the very values universities stand for: tolerance, openness, free debate, and the legitimacy of a plurality of perspectives. To this day, these two and similar events call upon universities in Germany to defend academic freedom and to live its values. Today, article 5 of the German basic law protects the freedom of teaching and research. Still, history teaches us that this privilege must not be taken for granted. We must not cease to promote and protect the principle of academic freedom as a foundational value of higher education and research.

This paper does not adopt an exclusively German perspective. Instead, it will look at the key characteristics of academic freedom from a theoretical point of view. These more general observations will apply to university systems across the board. In recent years, in Germany and elsewhere, academic freedom has often falsely been equated with the question of free speech: Who gets whose permission to say what on campus? Undoubtedly, freedom of speech is a key element, yet the concept of academic freedom is much broader in scope. It is also much older than recent debates on identity politics seem to suggest. Academic freedom and its institutional embodiment, the autonomy of universities, are grounded in the ideas of the Enlightenment. In fact, I strongly believe that academic freedom is a European idea and principle. Rooted in our shared European past, it binds universities together across all of Europe. Academic freedom, just like research itself, transcends the narrow boundaries of the nation state. It is an inherently international concept and idea. Our efforts to protect threatened students and scholars, in China, in Hong Kong, in Iran, in Turkey, and, closer to home, in Hungary and Poland, are not only acts of solidarity with those less fortunate than we are. These efforts are also moments of self-assurance which urge us to reassess our understanding of academic freedom.

Academic freedom allows for open discourse and the inclusion of a multitude of perspectives. In principle, there are no restrictions on the range of topics and arguments to be debated on campus. Universities should always be spaces where controversial debates can take place and where arguments can be exchanged without the fear of negative repercussions. These debates and arguments can certainly be of a political nature. And yet, academic freedom is not to be equated with an “anything goes”-approach. Debates on campus must follow the rules of academic discourse. All speakers need to elucidate their methodology and theoretical approach, arguments need to be grounded on facts, divergent opinions need to be acknowledged and debated, and enough information needs to be presented to allow for verifiable conclusions. The strict rules of academic discourse set the limits of what can be said on campus.