CDBU in the International Herald Tribune 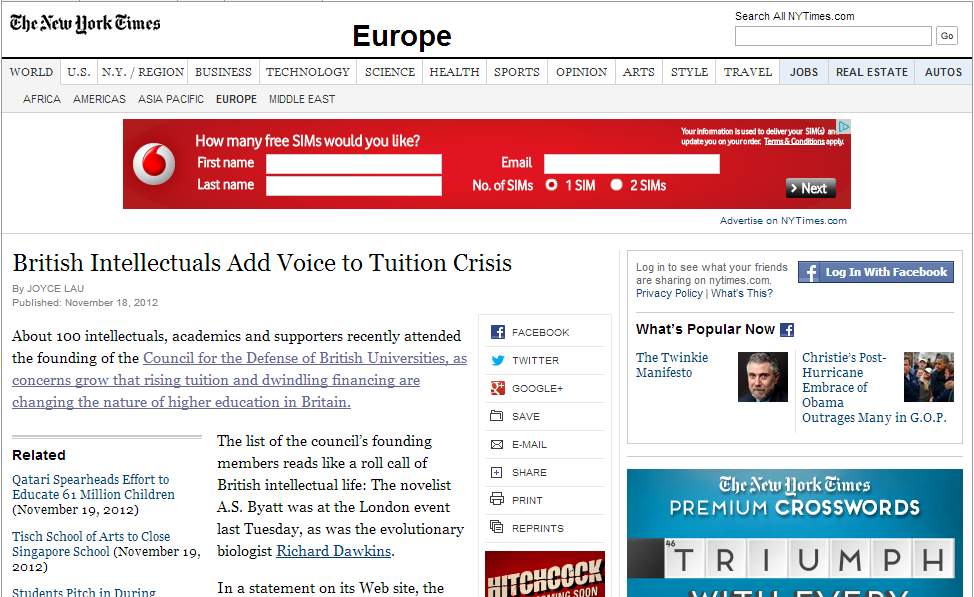 The CDBU was recently featured in an article in the International Herald Tribune. The piece was subsequently reprinted in the New York Times. Here’s an excerpt:

“Universities are among the U.K.’s most successful institutions,” Howard Hotson, chair of the council’s steering committee, said by telephone from Oxford, where he is a professor at St. Anne’s College. “Yet the U.K. system is being radically overhauled on a scale and pace unlike anything ever attempted in modern times. Undergraduate study has effectively been privatized across the whole of England.”

As part of education overhauls over the past few years, the Department of Business, Innovation and Skills has been given greater influence over decisions affecting universities.

“This is because the government sees universities as a business, and we oppose that,” Thomas Docherty, a professor at the University of Warwick and the London Graduate School, said by telephone.

Some of the financial support for undergraduate teaching has shifted from direct government financing to school fees. Universities, finding themselves more dependent on tuition, may feel the need to compete for students. “The funding now follows the student,” said Mr. Docherty, who also sits on the council’s steering committee.

“Students should not be seen as consumers or customers,” he said, adding that both domestic and foreign students were being treated like “cash cows.” “They should be seen as students who are engaging with the teaching process.”

“We’ve seen a significant drop in applications in students from poorer backgrounds,” he said. “Those in the middle class are thinking twice before applying to university.”

Problems have extended beyond the classroom. “The research which is encouraged, which is regarded as the most legitimate, is that which serves the market, with immediate economic effect or economic benefit,” Mr. Docherty said. “While that is important, it should not be of primary importance.”