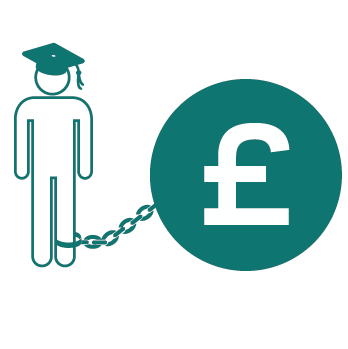 As noted in an earlier blogpost, CDBU has a strong interest in student fees.

We are concerned that Fees in England are nearly four times higher than in Ireland and seven times higher than the next most expensive country in the EU, the Netherlands. English students now graduate with over three times more student debt than the average American student. By 2046 collective unpaid student debt will be £330 billion in today’s money.

Students have been told that the state will pick up their unpaid debt, but in thirty years’ time they will be the taxpayers who will have to repay the unpaid balance on their own student loans. So the current fees system shifts the entire funding burden from older people – whose university years cost them comparatively little or nothing – to the next generation.

The current government plans to make matters even worse by selling student debt to banks and pension funds at a knock-down price. The aim? To fund tax cuts that help older people even more.

Most students and parents in Britain, from all backgrounds, agree that the majority of higher education costs should be paid by the state.

In common with many of our academic colleagues, we think that the current system is unfair, irresponsible and unsustainable.

To raise awareness of this issue, we have launched a short infographic that provides the key facts on two A4 pages.