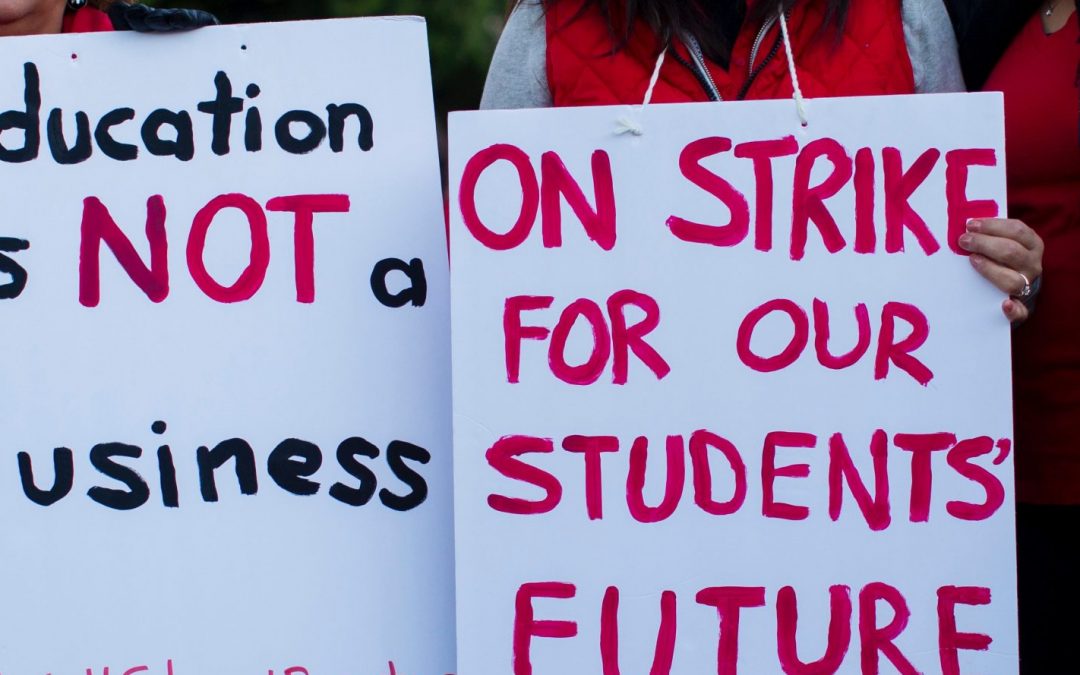 If you would like to contribute, please email pitches to cdbupress@gmail.com.

Students could face more strike action at universities this term after the academics’ union opened a ballot over pay, pensions and conditions. University and College Union (UCU) general secretary Jo Grady said the UK’s flagship university sector was built on the “exploitation of staff”. They had experienced a decade of pension cuts, collapsing pay and insecure contracts, she said. University employers said the prospect of disruption was “disappointing”. The union is demanding:

The ballot represents a ramping up of the long-running dispute between UCU members and university employers, with staff at 152 institutions being balloted. A total of 78 of these are being consulted during the next three weeks over pay and working conditions, with another 68 facing two ballots – over pay and conditions, plus the USS pensions scheme.

The leader of the UK’s main higher education union has said that the idea that staff are “desperate” to strike again “could not be further from the truth” as a new ballot on industrial action over pay and pensions was opened. Staff at a total of 152 institutions will be balloted by the University and College Union over the next three weeks, 78 over the latest pay offer from employers, for a rise of 1.5 per cent in 2021-22 and working conditions; six over cuts to pensions provided by the Universities Superannuation Scheme; and 68 on both issues. The strikes, if approved by members, would be the fourth widespread walkout in the sector in little over three years. UCU general secretary Jo Grady said universities had “prioritised tuition fee and research income” over the needs of staff and students, and added that those working in institutions were at “breaking point” over workloads that she said had only increased during the pandemic. “The idea that staff are desperate to go on strike again could not be further from the truth but they have really been left with no other option about how they go about improving their working lives and really recapturing what working in a university and working with and for students could and should be,” she said.

Responding to Universities UK’s (UUK) claims that they are serious about reforming USS and making progress towards ‘higher quality, lower cost’ pensions, UCU general secretary Jo Grady said: ‘All the press releases in the world cannot hide the fact that UUK are cutting USS members’ guaranteed pensions by 35%. Instead of wasting time on ridiculous PR moves like this to undermine our upcoming strike ballot, employers should withdraw their cuts and agree to a new valuation of the scheme. ‘UUK’s press release urges UCU to work with them on reforming the USS pension scheme, yet the contents do not reflect the reality of the discussions that have taken place, which is ironic to say the least. ‘UCU is of course open to exploring new areas of scheme design, including conditional indexation, but as yet no detail has been provided or terms of reference been drawn up. Reform via press release will not deliver the meaningful change that members need, nor will hollow gestures of ‘joint working’ after employers have already forced through their cuts. ‘It’s quite something for employers to now be talking about exploring a high-quality low cost option for members. This was exactly what UCU negotiators proposed in the union’s own plans, which for the first time in the scheme’s history would have guaranteed benefits for the thousands of low-paid and insecurely employed staff who are currently priced out of joining USS. Our members haven’t forgotten that employers spiked these proposals, opting to force through their own cuts instead.

Companies which provide students with essays in exchange for a fee are to be made illegal, the Government has announced.  The Department for Education said it would outlaw ‘essay mills’ as part of a new Skills and Post-16 Education Bill. The DfE told i firms found to be selling essays could be hit with fines if convicted of an offence under the legislation. Essay mills have long been controversial, with some students using them to cheat in university assessments. However, the companies themselves claim they can help students understand a topic by providing them with a “model answer”. On Tuesday, the DfE announced that it planned to make it a “criminal offence to provide, arrange or advertise these cheating services for financial gain to students taking a qualification at any institution in England providing post-16 education, including universities”. Alex Burghart, the minister for skills, said: “Essay mills are completely unethical and profit by undermining the hard work most students do. We are taking steps to ban these cheating services.”  The DfE said banning the firms would “help to safeguard the academic integrity and standards of post-16 and higher education in England”, and protect students from “falling prey to the deceptive marketing techniques of contract cheating services”. In recent years the Government has come under increasing pressure to take action against the companies, with 46 university vice-chancellors calling for a ban in 2018.

I run a lot of focus groups in a lot of places. There are more than a few moments that live long in the memory, but one came specifically to mind this week when I was thinking about the renewed political interest in the slightly nebulous idea of “civic pride”. This focus group took place in the northeast. I was talking to a bunch of working-class non-graduates – the new Tories if you will – about local education when one 58-year-old semi-retired ex-steel worker from Middlesbrough turned to me and said “the local university is the pride of Teesside”. It was not, I must be honest, exactly what I was expecting. It didn’t reflect the stereotypical “town and gown” divide. Indeed, my new friend was not alone; the rest of the participants soon fell in behind him. They were, to a man and woman, very supportive of the contribution that the University of Teesside made to their community. They knew more than might have been expected about its research strengths, its work with local communities and its economic impact on the life of their town.