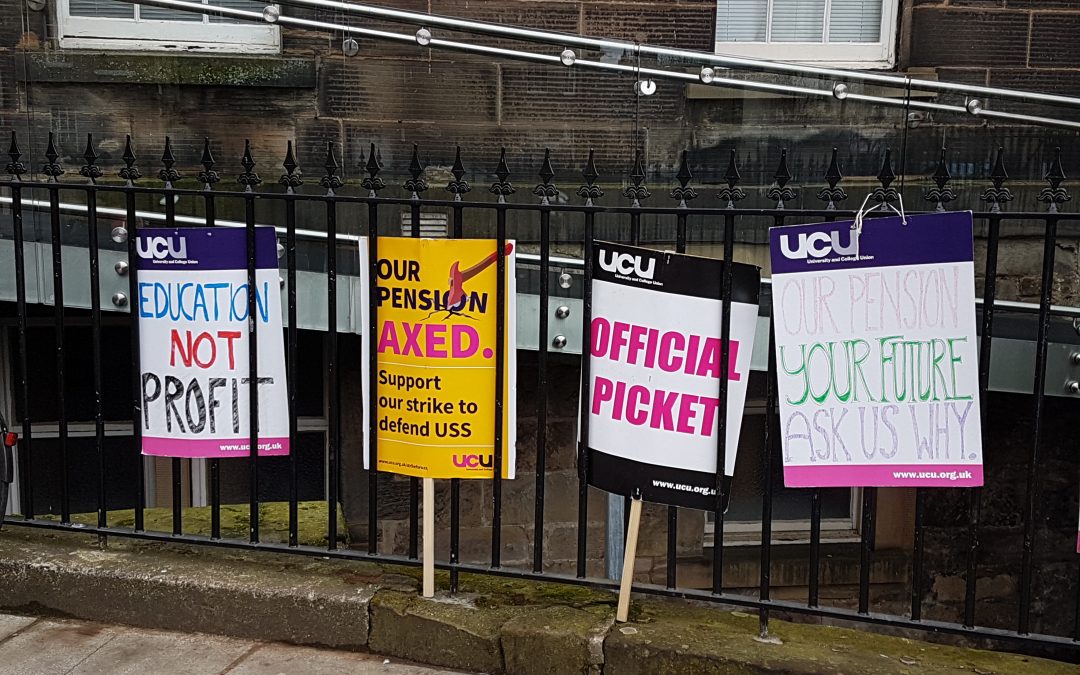 University and College Union will ballot its members to strike once again if they are forced to resume in-person teaching and return to unsafe campuses. Meanwhile, the government has published its highly anticipated response to the Augar review, and rent strikes rage on across the UK.

Would you like to write for the CDBU blog? We are currently accepting submissions! Please send pitches to Becca Bashford at cdbupress@gmail.com. Thank you!

University tuition fees in England will be frozen at a maximum of £9,250 for the next academic year. The Department for Education (DfE) said a longer-term decision on cuts to fees would be delayed until the next Comprehensive Spending Review. But education sector groups said the government “is wasting an opportunity” to help university students. Ministers also set out plans to improve post-16 vocational education including student loans for adult learners. The DfE also launched a consultation on changing the timetable for applying to university – to a so-called “post-qualification admissions” system.

UCU general secretary Jo Grady, said: ‘The previous prime minister commissioned the Augar review because the higher education funding system was so politically toxic. Sadly this interim response confirms that there will not be a radical change to the current system. The Westminster government is wasting an opportunity to make a real difference for students and institutions.Covid has exposed many of the weaknesses of the tuition fee system. We need a different approach to HE funding which provides long-term security, doesn’t leave institutions exposed to major market shocks and puts the interests of students and staff first. In further education, the government needs to deal with the glaring problem of the chronic underinvestment which the sector has suffered. It’s not good enough to kick the issue into the long grass until the Spring Spending Review.’

More mitigations have been agreed to help ease pressure on universities as they prepare for the Research Excellence Framework, although the exercise will not be delayed further.The four funding bodies behind the REF said universities had “raised concerns” about completing the research exercise during the tightened Covid-19 restrictions put in place across the UK this month, which have also seen clinical staff called up to work on the NHS frontlines. Universities will be able to request an extension, which will be considered “on a case-by-case basis, with the aim of supporting participation in the exercise wherever possible, while giving due regard to the effect of any delay on the panels’ assessment”.

A proposal for UK university applications to be made in just a few weeks over the summer is one of two “feasible” options that the Westminster government says it is putting forward to overhaul higher education admissions. The post-qualification applications option, which the government believes could still allow university terms to start in October, appears in its consultation on changing admissions launched alongside a raft of other policy papers on the future of the sector. Universities themselves have been moving towards preferring a system of “post-qualification offers”, where applications are still made before exam results but institutions offer places after grades are known.

Lecturers warn they will strike if forced to resume ‘unsafe’ teaching – The Guardian, 17/01/2021

University lecturers will not resume “unsafe” face-to-face teaching this academic year, and any attempt by the government or vice-chancellors to reopen campuses in February will fail, the UK’s largest academic union has warned. The University and College Union will ballot its members to strike against the resumption of in-person teaching, should any university attempt to organise the return of its staff to campuses over the next six months while staff feel it is unsafe. The move comes as the National Union of Students demands that universities stop charging students fees and offer them rent rebates while they are unable to use their accommodation, with thousands planning rent strikes.

UCU believes any return to in-person teaching this academic year is impractical due to the Covid-19 pandemic being at its worst stage since March 2020. The union also pointed to regulator concerns over the type of tests the government intends to use to reopen campuses, and delays in the government’s mass vaccination programme, as further evidence that a rushed return could compromise safety. The union said that university staff have faced unmanageable workloads over the past year trying to adapt teaching for both in-person and online provision, and said a clear decision now that the majority of courses will remain online for the rest of the academic year would allow staff to plan accordingly. UCU said that if university management and the government do not provide this certainty it will support members to fight to stay working remotely off campus, including balloting for industrial action.

The ‘Skills for Jobs White Paper’ was released this morning and includes a raft of measures to “realign” the post-16 system around the needs of employers. While the Department for Education has claimed the plans are “revolutionary”, sector leaders say that it “falls a bit short” of this ambition as it mostly builds on existing aspects of the sector. The white paper’s reforms (see list below), released to the press ahead of publication, include a greater role for employer groups, such as Chambers of Commerce as previously reported by FE Week, in developing courses on offer, new college “business centres”, and further details on a new lifelong loan entitlement, which will not kick in until after the next general election, as part of the prime minister’s lifetime skills guarantee.

As England was plunged into lockdown earlier this month, many students were told to stay put while away from their term time accommodation.While universities have responded with different forms of support — including waiving fees — rent strikers across the country continue pushing for more concessions during the pandemic. While Nottingham Trent University has said residents of university-operated accommodation no longer have to pay rent if away during lockdown, the rent strike group set up by students now wants to see discounts for the thousands in private accommodation too.

If universities were to be entrepreneurial businesses they would borrow accordingly, and the sector’s debt trebled in a decade, to £12bn in 2018. Raising private finance, according to one critic of the system, “generates imperatives for market-conforming behaviour” – maintaining their credit ratings, committing to a continuous flow of students and their fees. The same imperatives require costs to be suppressed, including such things as the pensions of academic staff, attempts to change which led to a series of strikes from 2018 to 2020. Academic employment was long based on the principle that, while you would never get rich, you would at least be secure. With the erosion of pensions and long-term contracts, say academics and their union representatives, the second half of this bargain is being taken away. And beyond the battles over budgets and contracts there is a culture shock, the belief that a university’s spirit of open inquiry cannot be subjected to the mechanisms of corporations.

‘Digital poverty’ could lead to lost generation of university students – The Guardian, 18/01/2021

Tens of thousands of university students in England need urgent help to stop “digital poverty” from hindering their studies during lockdown, according to a group of vice-chancellors and higher education bodies. While the government has provided laptops and other devices to disadvantaged school pupils and college students in England, the group says university students have been ignored, with little or nothing done to help them access remote learning while campuses are off-limits. The group including Jisc – previously known as the Joint Information Systems Committee, which maintains UK higher education’s digital networks – has written to the education secretary, Gavin Williamson, to warn of a “lost generation” of students, especially those from disadvantaged families.

UK university admissions officers have said they need more clarity about the plan for replacing cancelled A-level exams to ensure that this year’s enrolment process runs smoothly. Earlier this month, the education secretary, Gavin Williamson, announced that end-of-school exams would not go ahead as planned because of the disruption to schooling caused by the coronavirus pandemic. Exams watchdog Ofqual has been asked to draw up proposals for an alternative way of deciding results that will involve “trust in teachers, not in algorithms”, with plans expected to be set out by the end of February.

Students affected by the Covid crisis deserve to receive money back on fees or rent, university leaders and the academics’ union say – and the government, not universities, should foot the bill. Prof Steve West, vice-chancellor of the University of the West of England in Bristol, says the government should offer rebates by cutting the amount that students have to repay for tuition fee and living-cost loans for this year. “That would be a very powerful signal to students and society as a whole,” he says. Students have criticised Boris Johnson on social media for failing to mention universities when announcing the national lockdown on Monday. A petition calling for a cut to tuition fees from £9,250 to £3,000 has reached 508,000 signatures. And as students face another term learning alone in their bedrooms, paying for accommodation they are not allowed to return to, many are demanding a rebate.

Only 155 out of more than 23,000 university professors in the UK are black, according to official figures. It remains below 1%, the same as for the past five years, and is an increase of only 50 posts despite the number of professorships rising by more than 3,000 in that time. At this senior academic level, women hold 28% of professorships, up from 23% five years ago. “The pace of change is glacial,” said lecturers’ union leader Jo Grady. “Universities must do more to ensure a more representative mix of staff at a senior level and stop this terrible waste of talent.”

Scholars have condemned “unlawful” attempts to sell their PhD theses without permission on Amazon’s Kindle service. The outcry follows the discovery by academics who took their doctoral studies at Durham University that their PhD dissertations had been scraped from the university’s online thesis repository, where they are freely available, and were being sold as individual titles for as much as £9.99. Around 2,000 PhD theses – many of which appeared under the authorship of “Durham Philosophy” – had been made available as Kindle e-books, according to Sarah Hughes, vice-chancellor’s research fellow in human geography at Northumbria University.

The University of Cambridge has launched a foundation year that will allow disadvantaged students with the equivalent of three Bs at A level a route into undergraduate study at the elite institution. The free foundation year will prepare students who “have the ability to succeed at Cambridge, but have been prevented from reaching their full potential by their circumstances” for further learning, as well as the chance to study at the university at undergraduate level after completing the year, the institution said.