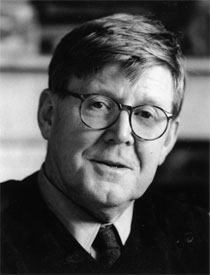 Alan Bennett is and English playwright, screenwriter, actor and author.

What Oxford gave me was time. Though, like many of my generation, I didn’t go up until I was 20 and had done national service I was young for my age and, though I worked hard, my first two years were pretty much wasted. It was only in what I imagined was to be my final year that I tippled to the (still to me) rather shameful fact that there was a technique to passing examinations that had less to do with knowledge and more to do with presentation and indeed journalism. This carried me through my finals and enabled me to stay on to do research and to teach … though I was not much better at teaching than I had been at learning. In that time, though, I was supervised by someone whose passion for his subject, his care for his pupils and his moral rigour I have never forgotten. His example has stayed with me all my life though in fields far from mediaeval history. Still he used to say that mediaeval history was itself just a branch of the entertainment industry.

and from the London Review of Books 4 September 1997:

K.B. McFarlane was one of the most influential medieval historians of postwar Britain, but his name is unknown outside academic circles. This would have pleased him . . . In terms of published output his career might not seem to amount to much; there was a small book on Wycliffe and a handful of scholarly articles in historical periodicals, with most of his work, notably the Ford Lectures on The Nobility of Later Medieval England published after his death. However, through his teaching and lecturing and the supervision of a large number of graduate students who then went on to greater things, he was undoubtedly the leading medieval historian of his time.

A perfectionist in both his research and writing he shunned popularity and publicity and was feared for his acerbic and deflating comments. But those who broke through his reserve knew him as a gentle and compassionate man and an incomparable friend . . . Anyone though who did research supervised by McFarlane must have been aware that they had a long way to travel before they reached the frontier of his own knowledge and there was very little any of his students could tell him that he didn’t already know, though this didn’t stop one trying. Having come under his spell I wanted very much to please him, even though it gradually became apparent to me that I was pretty hopeless at research and not much better as a teacher.

He did too much teaching himself and grumbled about it but never treated it as a chore; what takes me by surprise in these letters [to his friend Karl Leyser] is how much his happiness and wellbeing was bound up with the progress and responsiveness of his pupils – and not just the cleverest ones either.