Radical changes on an international scale: On the parallel ‘reforms’ of British and Czech university systems 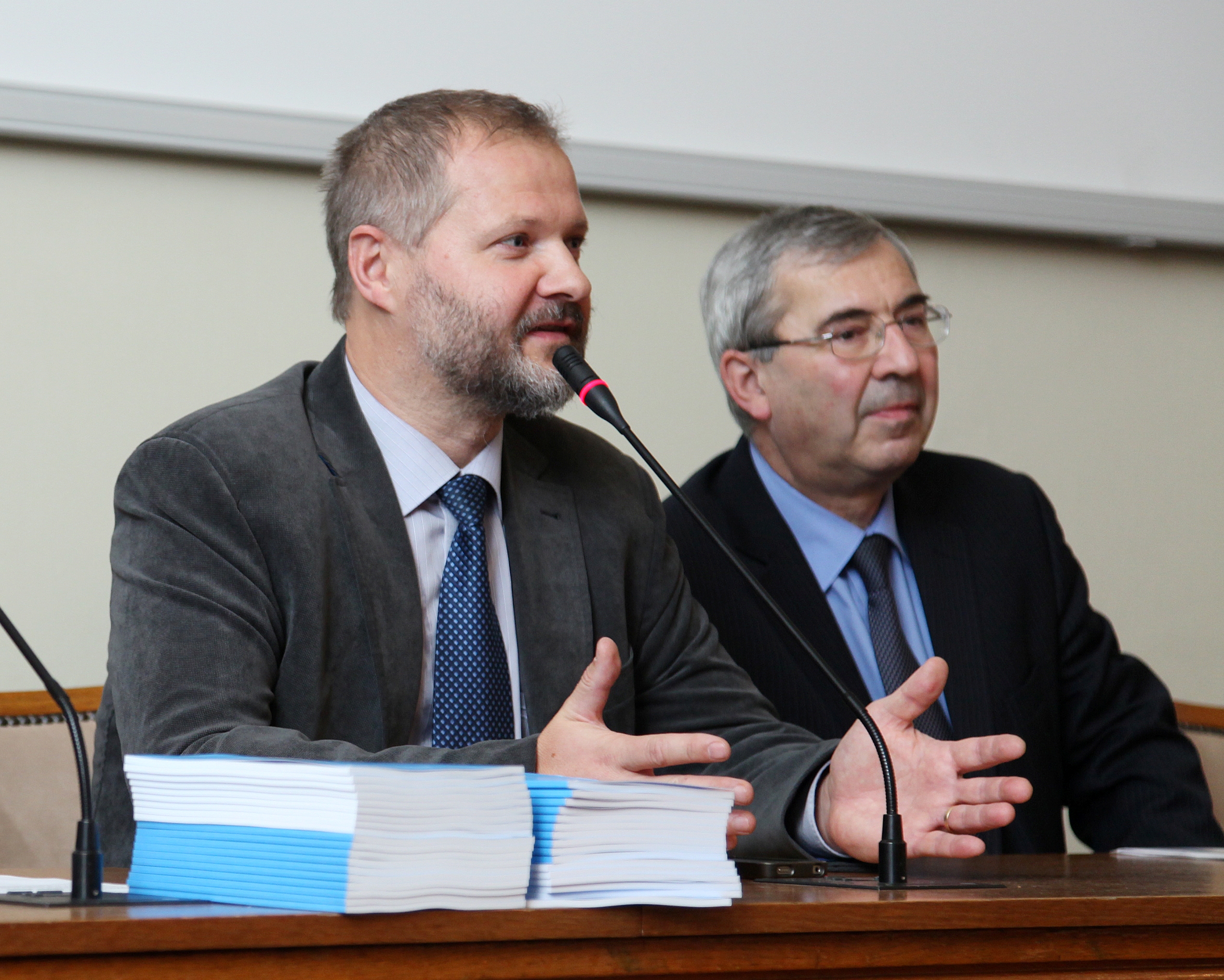 The Rector of the Charles University in Prague, Professor Václav Hampl, with copies of the newly published Czech translation of In Defence of Public Higher Education. To his left, Dr Jiří Beneš, Vice-Director of the Institute of Philosophy of the Academy of Sciences of the Czech Republic and a member of the Academy’s Council. Photo: Stanislava Kyselová, Akademický bulletin.

On 27 November 2012 Professor Howard Hotson was invited by the Institute of Philosophy to speak at the Academy of Sciences of the Czech Republic on the ‘radical shake-up’ of the UK university system. His lecture attempted briefly to put the ongoing marketisation of English higher education in international perspective and to use it as a means of understanding the very similar ‘reforms’ being simultaneously introduced elsewhere.

The local significance of this theme was revealed at the outset of the proceedings by Professor Václav Hampl, the Rector of the oldest of Czech universities, the Charles University in Prague.  Like many institutions in neighbouring countries, Czech universities maintain the tradition, now virtually extinguished in the English-speaking world, of electing their leadership directly from amongst their own professors; and Professor Hampl’s perspective on university reform was evident in his decision to use the occasion to announce the publication by his university’s press of a 58-page booklet, entitled Braňme veřejné vysoké školství! (Defend Public Higher Education!).  This work, it emerged, is a Czech translation of In Defence of Public Higher Education, the document produced in September 2011 under the leadership of Professor John Holmwood of the Campaign for the Public University in response to the UK higher education White Paper of June 2011.

As the Rector’s preface to the Czech version makes clear, ‘The underlying motivation and main features of the [British] reforms closely resemble the [Czech] White Paper on Tertiary Education and the draft Higher Education Act presented to the Czech Government’s Legal Board in autumn 2011’.  In the Czech Republic and the United Kingdom, in other words, very similar changes are being introduced on a virtually identical timetable, and those opposing these changes therefore need to draw inspiration from one another.

In publications of 2008 and 2009, the Charles University had warned of the dangers of the radical changes being proposed for the Czech university system.  But these attempts to provoke ‘critical discussion on the merits of public higher education and on the conditions of its preservation’ were dismissed by the proponents of reform as ‘manifestations of rigidity and of the aversion of Czech academics to every change’.

However, news of opposition to similar changes in the UK strengthened the hand of Czech colleagues in several important respects.

In the first place, the international reputation of the British university system, and the failure of those who would overhaul it ‘to propose a single convincing argument in favour of radical change’ reveal something very significant: the mere fact of a government’s determination to ‘reform’ a national university system implies neither that the system is seriously defective nor that the ‘reforms’ will improve it.

Second, the fact of British opposition undermines the attempt to characterise Czech opposition as backward-looking resistance to ‘modernisation’ in a formerly socialist country struggling to catch up with the world of globalised capitalism.  In the Rector’s words, ‘The text submitted by British academics confirms … that our views resonate with critical voices of intellectuals elsewhere in Europe.’

Third, the fact that very different university systems are being overhauled simultaneously in very similar ways implies that opponents of these changes need to establish contact with one another, to analyse the international forces driving these changes, and to share their experience of the arguments and activities most effective in opposing them.  As Professor Hampl’s preface puts it, ‘Given the mutual interconnection and collaboration within the sphere of European higher education, I consider it both natural and necessary that we familiarize ourselves with [these arguments] in detail.’

If the British contribution to Czech developments is illuminating, the Czech perspective on English developments is no less so.  After the lecture, Professor Hotson was interviewed by two leading Czech academic newsletters: Akademický bulletin, the official magazine of the Czech Academy of Sciences, and iForum, the internet magazine of the Charles University.  English and Czech versions of the first interview are now available, as well as English and Czech of the second. Both opened by posing variations of a key question familiar to those who have discussed current UK higher education policy with informed foreign observers: ‘The UK higher education system is regarded as one of the most successful in the world …. and yet the government has decided to initiate radical reforms. What was behind this decision?’  The UK government’s eagerness radically to overhaul what is widely regarded as one of the finest university systems in the world is a source of widespread astonishment overseas.

The British university crisis must therefore be placed in a broader international context.  In defending our own universities, we may also be helping to turn back a tide which may otherwise engulf many other university systems as well.