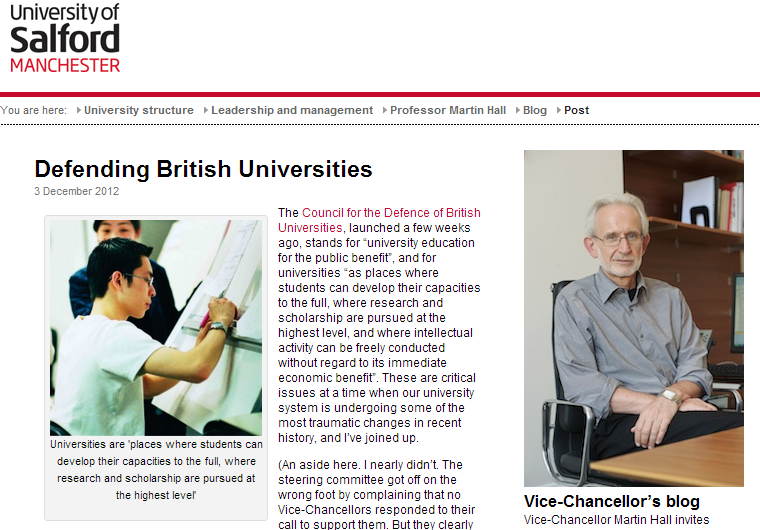 Professor Martin Hall, Vice-Chancellor of the University of Salford and historical archaeologist, has written a piece in support of CDBU on his personal blog, which has also been reproduced on the higher education blog Wonkhe. Here are a few excerpts:

The CDBU is right to emphasise the present danger. It was immediately apparent that the reforms introduced after the May 2010 election shifted away from a balance between the public and private benefits of universities, and to an overwhelming emphasis on individual return on investment and market driven competition.

A significant minority of Vice-Chancellors saw this and argued against the changes and their consequences. I’ve repeatedly written about the issue, as have many others. The counter-argument was that elite universities, that had been tapped by government as legitimate claimants for the most expensive price tags (and could hope to be allowed to charge more in the future), would benefit disproportionately from the new settlement. These universities supported the Coalition’s settlement, and won the case in the animated debate within Universities UK. Unfortunately, though, there have been unintended consequences for them as well, as universities ranked high in the newspaper league tables have seen places unfilled. They, too, are now critics of government policy.[…]

The core weakness in the Coalition’s approach to higher education in Britain is the surrender of the case for public goods in favour of a relentless insistence on private benefits and pseudo- market competition (there can be no real market for student places when both price and supply are centrally regulated, as is currently the case). This is the hub of the case made by the Council for the Defence of British Universities, and why this is a movement worth supporting.

The CDBU will roll out a major membership campaign early in 2013.  Starting with learned societies and other academic organisations, then moving via students and alumni to the general public, it will be complemented by further targeted recruitment of key individuals. Meanwhile, all those who share our aims — whether academic or administrative staff, students, alumni or concerned members of  the general public — are warmly encouraged to get in touch.