The Interdependence of Academic Freedom and Protest 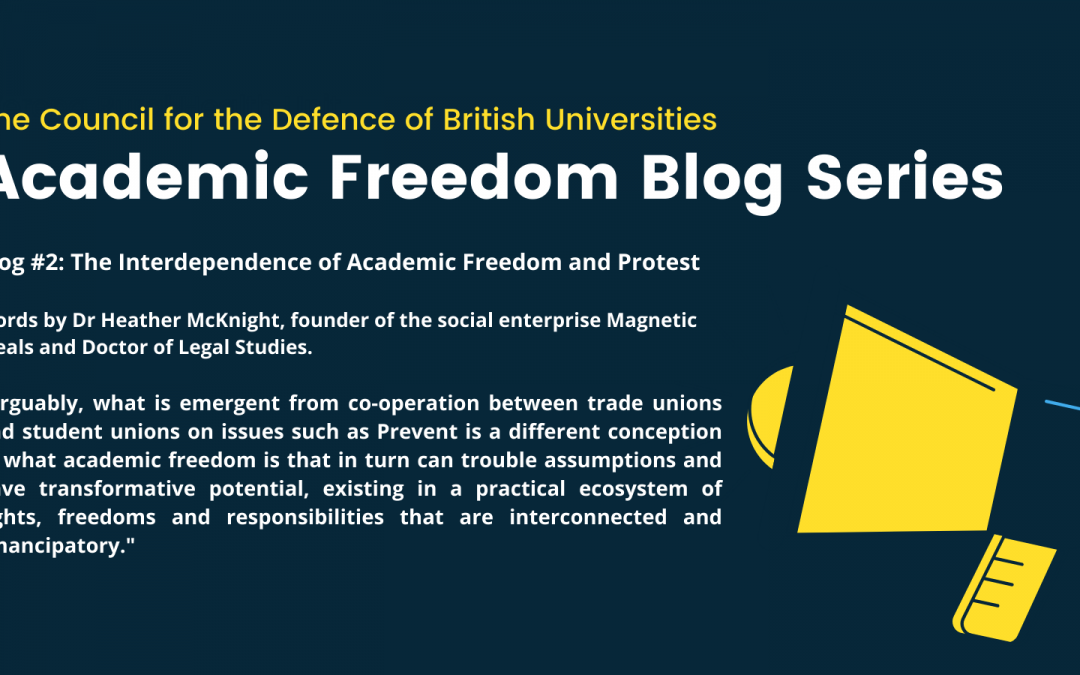 In 1970, the Commission on Academic Freedom and the Law (CAFL) released research exposing changes in how universities were using the law: a discontinuity that both marked and reflected the historical moment. The joint commission between the National Union of Students (NUS) and the National Council for Civil Liberties (NCCL, now Liberty) included student officers, lecturers and lawyers. It examined the legal relationship between students and their academic institution, considering incidences of direct action, disciplinary processes and the implication of forced departmental closures for students, academic and non-academic workers. As well as drawing on legal experience and case law, this commission conducted surveys of registrars and principals of colleges of education and technical colleges from ninety-four institutions.

The CAFL set out the situation as it stood in 1970, which followed a period of increased student activism. The ‘68 riots and growing student numbers in the UK led to the portrayal of students as a drain on public resources, and a public menace in the press. The commission’s report highlights a lack of student participation in decision making as a primary reason for increased student-led direct action. This lack of participation robbed them of their voice, marginalised their position and eroded their rights; however, the public and media were concerned at this time that students had special privileges. In practice, the NUS and NCCL Commission found no evidence of this and instead found that in court, the opposite was likely to be accurate as “severe exemplary and deterrent sentences” were being passed upon students. The commission identified an unprecedented trend in disciplinary cases escalated to civil and criminal courts. Students were subject to multiple forms of disciplinary technologies enforcing both criminal law and internal institutional procedures. Trends of imposing excessive penalties on students for engaging in political acts have continued to the present day.

The CAFL concluded that there was an interdependence between academic freedom and rights and  freedoms in the rest of society: the right to study, to have access to facilities to study; the right to freedom of thought, the right of staff to take industrial action, and of students to protest. It was not only the freedom to write and publish, but also the freedom to influence the decision-making body of the institution of study or work, and to participate in political activities. This definition of academic freedom provided by the report includes rights of the whole of society to access education, and protection for the non-academic employee, including the protection of the student right to protest within the law. Significantly, this report supports a joint expression of academic freedom between staff and students, as well as noting that protest is fundamental to academic freedom.

In the UK today, academic freedom is often conflated with freedom of expression or free speech, failing to recognise its interdependence with other rights. Several other human rights come into play concerning academic freedom, as discussed and defined by Trade Unions and Student Unions. Here, this includes the following from the 1998 Human Rights Act: Article 9 Freedom of Thought, Belief and Religion; Article 11 Freedom of Assembly and Association; Article 14 Prohibition of Discrimination; and Article 2 (protocol 1), the Right to Education. Article 14 of the Human Rights Act Prohibition of Discrimination (a right used indeterminately with other rights) places a limit to freedom of expression, in which the circumstances of someone’s right to express themselves impinge on others’ rights.

Sadly, this conflation of academic freedom solely with freedom of expression is used to defend the rights of the privileged few and create narrow legal definitions for academic freedom. Today arguments around academic freedom are used to defend the right to hate speech, narratives that persecute society’s most vulnerable minorities, and to defend hegemonic notions of ‘British Values’ in the Prevent Legislation that imposes colonial norms and standards. Scholars at Risk, an international network that protects scholars and promotes academic freedom, noted that robust and nonviolent student and staff movements are essential to understanding and engaging in contemporary political issues, identifying a necessary space for student unrest in the struggle for a better future. Unfortunately, in the UK, protest is being systematically removed from the narrative of academic freedom or else set in active opposition to it. This was demonstrated by a report on academic freedom by the right-wing think tank Policy Exchange (2019), where one research question equated protestors with censors, rather than viewing them as having a right to express their own views; it is but one of a series of Policy Exchange pieces that can be deconstructed in this way. Conservative think tanks and government officials promote the idea that  protest is the enemy of academic freedom, rather than an integral part of it. They aim to position ‘overly sensitive’ students who have been popularly dubbed ‘snowflakes’ as a ‘threat’ to academic freedom.

At present we are seeing our government plan to bring in fees for student unions who fail to prevent students from protesting at events they oppose. The Joint Commission on Human Rights Select Committee on Freedom of Expression (2018) did not address student protest in relation to academic freedom, save to condemn student protests as shutting down freedom of expression, rather than being interdependent with it. In such investigations which view protest as a threat, and not a right, there is no consideration of the power dynamics which involve the repression of student, and indeed staff, activism through the increasing use of trespass law and other excessive legal charges.

The above erosions, alongside the infamous Prevent Guidance, have created hostile environments in UK HE that restrict academic freedom for academics, other university employees and students regarding both the right to protest and industrial action. Despite this, UCU, NUS and the Council for Academic Freedom and Academic Standards define the right to protest and take industrial action on campus as critical components of academic freedom and ones that must be protected for student unions and trade unions alike. Scholars at Risk view the right to peaceful protest as part of academic freedom; they also reported that violent and coercive attacks on student expression are increasing internationally. The report notes that in 2018 hundreds of students were killed, injured, arrested, or subjected to other coercive force in connection with “expressive activity”. In the UK, we see an increasing trend towards arrests during student protests and using coercive force in response to both student protest and restrictions on industrial action for staff. This trend is alarming, with staff and student disciplinary procedures around protest an issue alongside those of police violence against students in occupations, demonstrations and marches.

We need to be fighting for a future that recognises the interdependence of academic freedom and protest rather than erasing or separating them as is currently happening in the Higher Education (Freedom of Speech) Bill.  Arguably, what is emergent from co-operation between  trade unions and student unions on issues such as Preventing Prevent is a different conception of what academic freedom is that in turn can trouble assumptions and have transformative potential, existing in a practical ecosystem of rights, freedoms and responsibilities that are interconnected and emancipatory.  How academic freedom operates must account for how academia and society are empowering and oppressive in unequal ways. If universities are to be useful public institutions, academic freedom must fundamentally support and include the right to protest and industrial action, and include all students, potential students and all university staff (not just teaching staff) in its purview.