Tuition fees must be high on the agenda before the election

Suppose that the government were to announce that post-16 years education were no longer free. If you wanted to stay on to do A-levels, your parents would have to pay a fee, which could vary with the popularity of the school. One can just imagine the arguments from an outraged public: the policy would be unfair to poorer families, would deter children from continuing their education, would damage the nation’s businesses – who would have to look abroad for qualified workers – and would ultimately increase the gulf between rich and poor, because the less well-educated children from poorer families would have reduced earning potential. Suppose, further, that expensive schools started recruiting sixth-formers from abroad to make up the numbers of fee-paying students in their classrooms. The idea seems so absurd that it’s hard to imagine any government proposing it, yet it has much in common with the move to charge university students increasing levels of tuition fees.

The introduction of fees started gently enough in 1998, when the undergraduate rate was set at £1,000 per annum. By 2004, this had trebled, but after the Browne review, universities were able to charge up to £9,000 per annum. Last year, the vice-chancellor of University of Oxford was quoted as saying that the top universities should be able to charge up to £16,000 per annum.  Despite initial protests, many people seem to have lost the will to resist, and come to believe that the world economic situation demands that education should be paid for by those who benefit from it, rather than by the state.

The counter-evidence, however, comes from international comparisons. Last February, Howard Hotson analyzed the situation in Germany, where local governments had done a U-turn, and instead of increasing tuition fees had decided to end them. Lower Saxony, which had been the last German state to retain tuition fees, abolished them in early October, leading commentators to ask, if Germany can do it, why can’t we?

You may wonder if Germany is an exception, and will come to regret its decision, but, as shown in this map of fees in the EU, it’s actually England who is the outlier, with substantially higher fees than other countries. 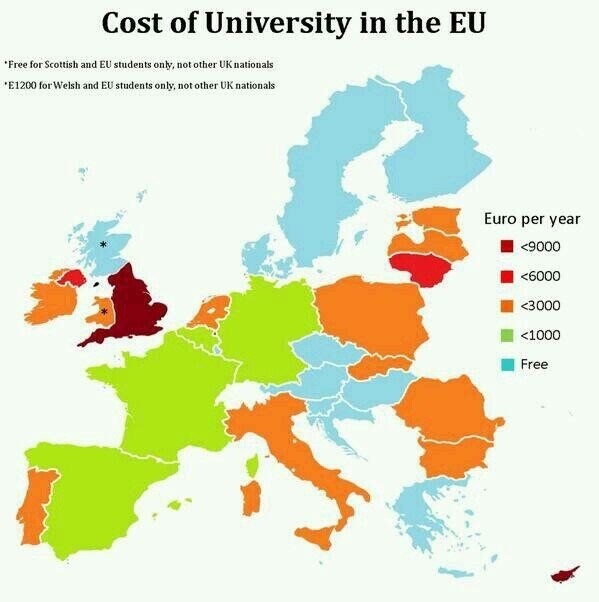 The country we are emulating, of course, is the USA, where one report in 2012 estimated the average cost of studying at a four-year private (non-profit) university was  $28,500 per year.

A notable point about the fees debate is that both sides defend their argument in terms of fairness. Those who want to deregulate fees and create a free market claim that it is fair to make the cost of higher education the responsibility of those who benefit from it, rather than expecting taxpayers to shoulder the burden. Nobody, though, has suggested that this concept should extend to older generations such as mine, who benefited from free university education. Why is the burden of debt placed squarely on the shoulders of the younger generation and not shared with those who could better afford to contribute? Furthermore, many graduates fail to get the anticipated good jobs, creating problems for the loan companies, who don’t get repaid, and enduring debt for themselves. This is especially notable in the US, where graduate poverty is a growing problem.

An alternative position on fairness – advanced in Germany –  is that that fees are unfair because they deter poorer students from engaging in higher education, and so increase the gulf between rich and poor. My own university, Oxford, already recruits a disproportionate number of students from private schools: putting the fees up to £16,000 p.a. is hardly likely to improve the situation. Yes, it’s possible to have bursaries for the poorest, but there will be many whose parental incomes are above the cut-off for such assistance, but still not adequate to cover the costs. And in those from wealthy families, it’s the parents who pay the fees, not the students. Thus the poor who do not go to university remain as poor as ever. The rich who go to university have their fees paid by parents and so start adult life with an educational advantage and no debt. Those between these extremes may benefit from education, but will be saddled with debt.

The problem is exacerbated at the postgraduate level. The prospect of further study will be daunting to those who end a first degree with thousands of pounds worth of debt. It is already difficult even for an exceptionally bright UK graduate to get a funded PhD place: there are few grants and stiff competition for them. Increasingly, those studying for doctorates are self-funded, with a high proportion of overseas students.  I’d be the first to argue that an international mix in a student body is a thoroughly good thing: everyone benefits from interacting with people from other cultures and our overseas postgraduates contribute greatly to academic life. But where do we draw the line? Is it satisfactory if our great universities, largely paid for by the state, are accessible for postgraduate study only to those whose parents can afford to support them, and are off-limits to bright English students of more modest means? This issue forces questions about what the point of a state-funded university is. Is it to educate our citizens, or to sell education to those who will pay the most, so as to make as much money as possible?

If we really want fairness, it would be better to create a system of higher education that gave everyone a bursary for further education, which could cover less academic options such as apprenticeships. This could be used to pay for a university education, or deferred until later in life for those who preferred to leave formal education immediately after school. To help pay for this we could increase taxation on those members of the older generation who have already benefited from a free university education.

There is no democratic mandate for increased tuition fees: quite the contrary. Just as in Germany, we had large-scale public protests at the prospect of fees, but governments pressed on with the changes regardless, aided and abetted by vice-chancellors who seemed totally sold on the idea. As one of the commentators on this Guardian piece noted: “…those who should be the guardians of Universities as institutions of public good, and higher education as a tool of enlightenment, i.e. the vice-chancellors, have been captured either through choice or circumstances into playing the market game…..It makes me very angry, but I feel utterly impotent to do anything about it as the most major electoral party promising change is the Greens. I did vote LD last time solely on their fees policy. That turned out well.”

P.S. 25th October 2014. For further thoughts on marketization of our universities, see this blogpost by Dorothy Bishop