German media coverage of the CDBU 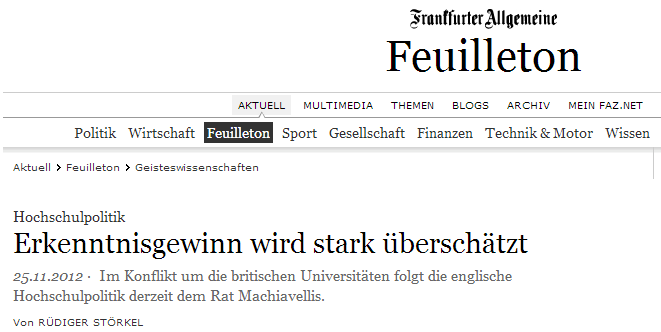 Continuing our coverage of overseas reactions to the foundation of the Council for the Defence of British Universities, Germany’s leading newspaper and radio news outlets have also picked up the story.

One could scarcely imagine a more illustrious company than the list of people testifying their concern for the state of higher education in Britain by their membership in the new Council for the Defence of British Universities. Several Nobel laureates, numerous members of the House of Lords, former politicians, internationally renowned scholars and scientists of many different disciplines, and leading intellectuals … have come together to form the Council for the Defence of British Universities, a heterogeneous association whose members are united above all by the conviction that they must oppose market-driven university policies in favour of classic academic values….  That the Minister of State for Universities, David Willetts, deemed it necessary to react to the foundation of the CBDU with a newspaper article of his own is an encouraging sign, even if he used it to reassert the very policies which the Council opposes.

The higher education crisis in England continues, and it remains a drama which we should keep an eye on. On 13 November it produced a new institution, the Council for the Defence of British Universities, registered as a non-profit company. This association of the most eminent representatives of higher education and learning, which has strictly abstained from party-political affiliations, intends to stimulate and coordinate opposition to the ongoing process of subordinating the universities to the dictatorship of short-termist economic interests and excessive bureaucratic control. It seeks cooperation with like-minded people both within the United Kingdom and throughout the world; for if the upheaval of higher education policy in England appears uniquely crass, it is only the most radical manifestation of a longstanding and powerful trend which is being felt everywhere….

It remains to be seen what success the institutionalisation of opposition to the conservative-liberal changes in English university policy will achieve.  But the rhetorical masquerade in Minister Willetts’s response to the public appearance of the Council for the Defence of British Universities already clearly reveals that the argumentative basis of the British government with regard to the true function of higher education is and will remain impoverished. When the author refers to his reading of Kant and Hume and feigns delight at the news of an organisation founded to oppose his own policies, he does not take these thinkers to heart so much as chapter 18 of Machiavelli`s The Prince, ‘In how far rulers are obliged to keep their word’: ‘People are so simple-minded and dependant on the exigencies of the moment that everybody who intends to deceive them shall always find somebody who allows himself to be deceived.’

On 28 November 2012, one of Germany’s premier radio news programmes, Deutschlandfunk, devoted an informative programme to the topic ‘CDBU-Rat zur Verteidigung der britischen Unis gegründet’, drawn partly from the interviews on BBC’s Newsnight the previous week.  The programme is available both as a podcast and a transcript.