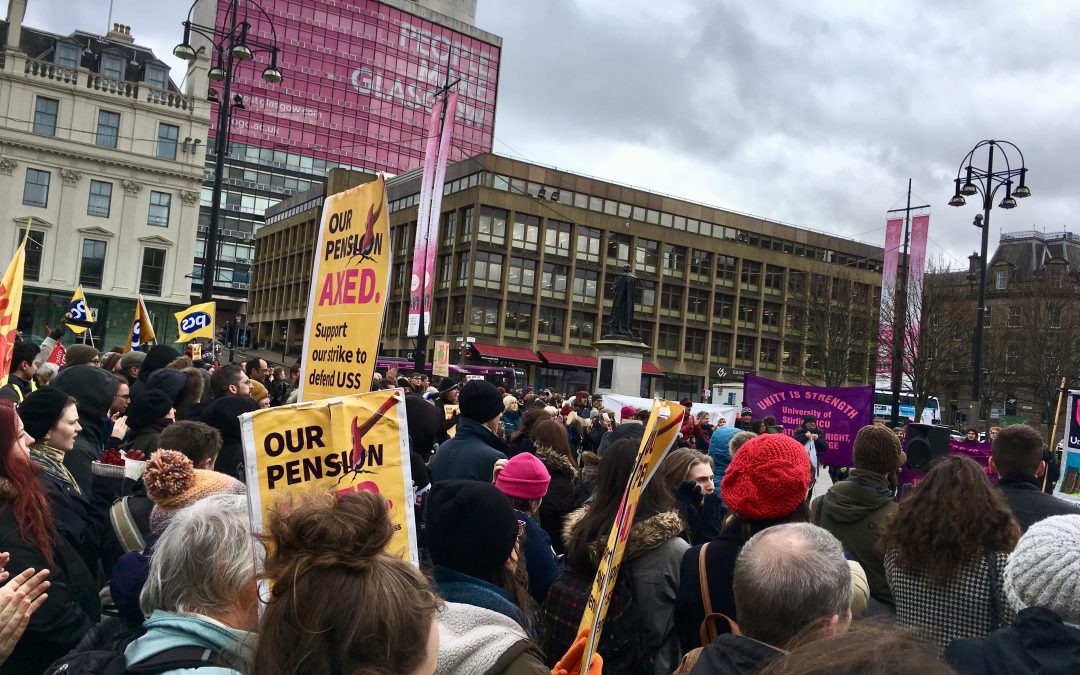 – New on the CDBU blog: ‘Getting off the back foot – and taking the offensive’ Words by Peter Scott, CDBU Trustee, Emeritus Professor of Higher Education Studies at the UCL Institute of Education and former Vice-Chancellor of Kingston University.

– Contribute to our blog series on academic freedom! Email cdbupress@gmail.com. You can find blog #1 here

UK universities and colleges face three days of strikes in December – The Guardian, 16/11/21

Campuses will be hit by strikes at the start of next month and there is a threat of more next year after the University and College Union announced that its members will stop work over pension cuts, pay and working conditions. The union said three consecutive days of strikes would take place from 1 December at the 58 institutions that backed ballots for industrial action this month. The 58 universities and colleges will be joined by a further six in undertaking other forms of industrial action, including strict working to contract and refusing additional duties, from the start of December and continuing indefinitely.

UCU general secretary Jo Grady said: ‘Strikes over three consecutive days are set to hit university campuses next month unless employers get round the table and take staff concerns over pension cuts, pay and working conditions seriously. ‘UCU has repeatedly asked employers to meet with us to try to resolve these disputes. But while we set out pragmatic solutions that could halt widespread disruption to UK campuses, university bosses refuse to revoke unnecessary, swingeing pension cuts or even to negotiate on issues like casualisation and the unbearably high workloads that blight higher education. A resolution to this dispute is simple. But if employers remain intent on slashing pensions and exploiting staff who have kept this sector afloat during a pandemic then campuses will face strike action before Christmas, which will escalate into spring with reballots and further industrial action.’

Not a single scientist has applied to a UK government visa scheme for Nobel prize laureates and other award winners since its launch six months ago, New Scientist can reveal. The scheme has come under criticism from scientists and has been described as “a joke”. In May, the government launched a fast-track visa route for award-winners in the fields of science, engineering, the humanities and medicine who want to work in the UK. This prestigious prize route makes it easier for some academics to apply for a Global Talent visa – it requires only one application, with no need to meet conditions such as a grant from the UK Research and Innovation funding body or a job offer at a UK organisation. But a freedom of information request by New Scientist has revealed that in the six months since the scheme was launched, no one working in science, engineering, the humanities or medicine has actually applied for a visa through this route. “Frankly, having precisely zero people apply for this elitist scheme doesn’t surprise me at all,” says Jessica Wade, a material scientist at Imperial College London and a diversity in science campaigner. “UK scientists’ access to European funding is uncertain, we’re not very attractive to European students as they have to pay international fees, our pensions are being cut and scientific positions in the UK are both rare and precarious.”

Students who have lived in UK since childhood denied loans – The Guardian, 23/11/21

Thousands of students who have lived in the UK since childhood are being subjected to a regime described as even harsher than the Home Office’s “hostile environment” tactics when they apply for study loans, according to a report. About 8,000 students a year with an immigration status known as limited leave to remain (LLR) apply to Student Finance England (SFE) for funds to enable them to take up university places. The students are often people of colour from countries including Jamaica, Nigeria, Pakistan, India, Bangladesh and Ghana. They have lived in the UK for much of their lives with their families. Many come from low-income backgrounds, have excelled at school, are seen as the brightest and best of their generation and have secured university places to study subjects such as law and medicine.

The Australian government expects 200,000 vaccinated foreign students and skilled workers will soon return without quarantining when the country further relaxes pandemic restrictions next week. From Dec. 1, students, skilled workers and travellers on working vacations will be allowed to land at Sydney and Melbourne airports without needing to seek exemptions from a travel ban, Prime Minister Scott Morrison said Monday. “The return of skilled workers and students to Australia is a major milestone in our pathway back, it’s a major milestone about what Australians have been able to achieve and enable us to do,” Morrison said.

UK universities face a fresh wave of strikes over pensions. That was the indication from reports warning that the students who have recently returned to university may face more disturbance from striking academics. It is easy to condemn them, but I do not. They are the victims of unduly risk-averse decision making at the Universities Superannuation Scheme, under the influence of misconceived regulation. The USS is a large funded scheme, with 476,000 members and £82.2bn in assets. Universities are also more or less immortal institutions. If they cannot afford the benefits promised in their scheme, nobody can, apart perhaps from the government. Given the impossibility of total safety, how “safe” would a prudent person want such long-term promises to be? Two recent papers illuminate this question.

Facebook, the metaverse and the monetisation of higher education – The Conversation, 09/11/21

The metaverse is a virtual world in which users, represented by an avatar, can shop, socialise, take part in leisure activities – and learn. Its development has become a priority for many tech companies, including Facebook (which recently changed its company name to Meta) and Microsoft. In a recent video presentation, Facebook CEO Mark Zuckerberg outlined the ways in which the metaverse would supposedly revolutionise life. Education was a key focus. Learning would become an immersive experience. By donning glasses or a headset, students could virtually “teleport” to any place or time. They could bring any object – a planet, a human organ, a car engine – to them to learn about it. Some aspects of the metaverse have already made their way into universities. The real revolutionary potential of the metaverse lies in how it allows for further profit to be made in higher education. As my recent research on digital technologies and higher education shows, these developments may further monetise the student experience and exploit the work of academics.