My mother came to England after the war, having met my father when working as a translator for the British Forces in allied-occupied Germany. She’d come from an academic family in Gottingen, and it’s hard to imagine her state of mind in finding herself in Ilford with a husband, a small child and no recognised qualifications. My father was a shopkeeper and money was tight. A few years later there were three children. By the time I, the youngest, was at secondary school, she was determined to do more with her life, and she embarked on a process of gaining first O- and A-levels, through a correspondence course, and then a degree through part-time evening study at Birkbeck College, while working as a secretary in London. Subsequently she gained a job as a lecturer in a local College of Further Education, where she flourished. At the time, like most children, I just took her student activities for granted, though I was aware this was not the kind of thing other mothers did. With hindsight, I’m incredibly proud of her, and immensely grateful for the much easier route through higher education that I was able to navigate.

This personal history made me particularly interested in a talk by Claire Callender at a seminar organised by the Knowledge Economy Campaign on 25 November. Callender is Professor of Higher Education Policy at Birkbeck and the Institution of Education, and she focused particularly on the topic of how changes in higher education funding affected part-time students. The news was pretty depressing.

The first startling statistic was that whereas in 2010 40 per cent of undergraduate entrants to English higher education institutions and further education colleges were part-timers, by 2013/14, this had fallen to 27 per cent. Callender argued that a major factor behind this decline was the changes in funding for part-time degrees, which were intended to facilitate part-time study but were ill-matched to the social and demographic characteristics of part-timers. 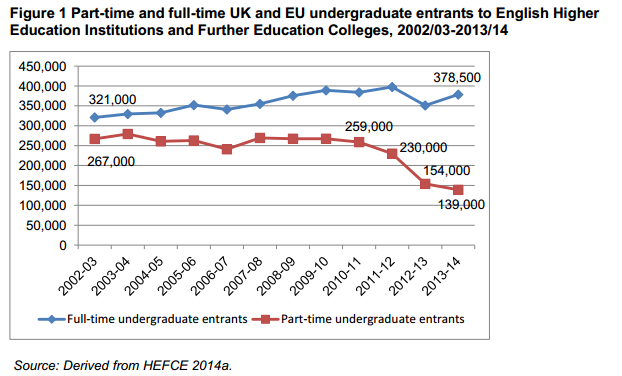 Figure 1 from Callender, C (2014) ‘The demise of part-time undergraduate higher education in England: who cares?’

Most part-timers are in work, and they have to fit their study around their job. Around 40 per cent of them are studying for a Bachelor’s degree: the remainder seek qualifications in vocational areas, education or business. They tend to polarise into those with no prior experience of higher education who are taking the opportunity to gain skills, and those with existing qualifications who are reskilling.

Whereas the vast majority of previously part-timers had to pay tuition fees upfront, since 2012/13 they have been able to access government-funded loans worth up to £6,750 a year. As with full-timers, the loans don’t need to be paid off until an earning threshold is reached (£21,000 per year) after which they pay nine per cent of their income above this threshold. Sounds like a good idea, but alongside this new system, there was a dramatic rise in tuition fees, which are now 2-3 times higher than before 2012/13. Furthermore, there are specific criteria for eligibility for student loans for part-timers: this means that most part-time undergraduates do not qualify for the new loans. For instance, you are ineligible if you already have a higher education qualification. Even if you are eligible, the loan may be unattractive if you have financial commitments such as a mortgage. At the same time, sponsorship of part-time students by their employer has dropped in response to the increase in fees.

Alongside the changes in costs and funding for part-timers, financial incentives for institutions to offer part-time courses have largely disappeared, and the number of available courses has declined. Many part-timers have limited geographical mobility, because of work and family commitments, and so closure of a part-time course at a local college or university effectively shuts the door to gaining further qualifications.

As Callender noted in her talk, part-time students are largely ignored in discussions of funding in higher education, yet they constitute a substantial proportion of the student body. As my mother’s experience testifies, being able to gain qualifications later in life can be transformational for individuals. When they made changes to funding, the government recognised part-time study as ‘a major step in terms of opening up access to higher education’ and argued that we should be aiming to increase, rather than decrease the numbers in part-time education. Sadly, that aim has not been achieved, and we need to look hard at ways of reversing the decline.

For a more detailed account see Claire Callender’s report ‘The demise of part-time undergraduate higher education in England: who cares?‘ which can be downloaded from a section of the Institute of Education’s website featuring papers on educational policy in the context of the 2015 election.