Perils of ignoring consultation on the Higher Education and Research Bill

“It seems ham-fisted to turn the academic world upside down when universities face so much turbulence and uncertainty after the Brexit vote and the rhetoric surrounding immigration.”

He was supported by a cross-party group of peers, including Labour’s shadow higher education minister Lord Stevenson, who stated:

“This bill is an attempt from the Government to run a market experiment through the bloodstream of our university system, and a classic case of understanding the cost of everything and the value of nothing.”

These comments are closely aligned with the CDBU’s evaluation of the Bill, and we are pleased to see a list of 516 Amendments to the Bill has now been proposed by the Lords.

We have to ask how on earth the situation has arisen whereby a Bill is not only being comprehensively revised at this late stage in its progress, but is also receiving criticism from heavyweight Conservatives who might have been expected to support the Government.

The problem appears to be the intransigence of the Minister, Jo Johnson, who has  ignored serious arguments against his Bill, which have been flagged up many times over the last year.

Let’s start by looking at the responses to the Green Paper which outlined the main proposals in the Bill. The volume of responses to the consultation was quite remarkable: there were 618 respondees in all, including 136 Higher Education Institutions, 26 alternative providers, 22 further education colleges, 78 student unions, and a large number of individuals and organisations with a stake in the sector.

These responses were summarised in a report by BIS. In addition, many institutions posted their response on the web, including the Universities of Cambridge and Oxford: I’ve singled these out because they are our most ancient universities, and might be expected to represent an establishment view. Critical comments in their feedback anticipated the points now being raised in the House of Lords, and might have been seen as a canary in the mine by a Minister less self-assured than Jo Johnson. Consider this comment from the preamble to the response by the University of Cambridge:

“The Green Paper fails to demonstrate an understanding of the purpose of our universities and the reasons for the sector’s international standing. Universities exist to pursue knowledge for the benefit of society, through education (teaching and learning), scholarship and research.”

Are such objections restricted to the Russell Group? It would appear not. The summary of the consultation findings by BIS does not break down responses according to their origins, but it does provide quantitative data for several items where respondents were asked to state Agree/Not Sure/Disagree. These had a worrying high level of Not Sure responses, suggesting that the proposals in the Green Paper were too vague or unclear to evaluate; in addition, the rates of Disagree were higher than Agree for many items – only 6 of 24 items attracted more than 50% agreement. And where Agree outnumbered Disagree, it tended to be for questions concerning general ideals, such as the desirability of improving access for disadvantaged groups; questions about specifics of implementation of proposals received a higher rate of negative responses.  The two items marked with * concerned the link between TEF results and fees, and were among those with lowest levels of endorsement. 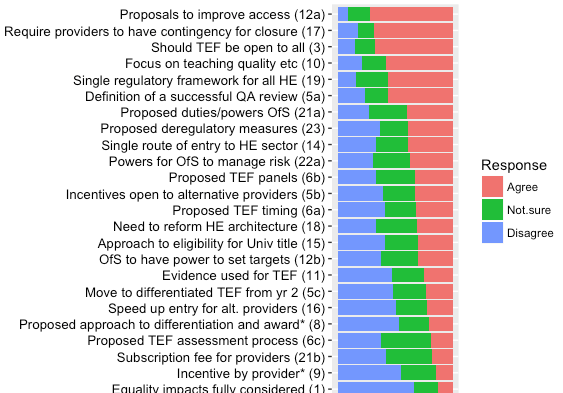 There was also a technical consultation on the TEF, which fared no better. The Office of National Statistics expressed concern about the suitability of the metrics to be used to evaluate teaching quality, and the Royal Statistical Society witheringly noted:

“It is concerning that Figure 4 equates student satisfaction as measured by the National Student Survey (NSS) with Teaching Quality. We are not aware that there is any evidence of a statistical association between the two concepts.”

Given this level of concern, one might have expected some radical revisions between the Green and White Papers. In fact, there were few changes, except that the TEF, which had been a major (and much-criticised) feature of the Green Paper was removed from the White Paper. Because it does not require legislation to introduce the TEF, it was possible to keep its implementation separate from the rest of the Bill, so it could be steamrollered through ready for introduction in 2017.

There were further opportunities for the Bill to be amended as it proceeded through the Committee stage in Parliament. And Jo Johnson described himself as listening to feedback, saying:

“During September and October, a cross-party committee of MPs scrutinised the Bill, along with over 300 additional tabled amendments. We heard evidence from a wide range of witnesses from university vice-chancellors and the National Union of Students to the head of Research Councils UK and consumer groups such as Which? And now we’re at Report Stage, you will see that we have reflected on these views.”

Except that none of the 300 tabled amendments were included! A handful of modifications were made to some statements to increase clarity and avoid ambiguity, but the core plans remained unchanged.

The House of Lords includes peers of all political stripes, but a key point is that many of them have extensive experience of the HE sector. They have run universities, sat on Councils, and they understand about all kinds of higher and further education, not just Oxbridge. Similarly, the CDBU has members covering a wide political spectrum, who are not always in agreement about issues affecting universities. The Higher Education and Research Bill has, however, created a united front: left- and right-leaning academics agree that the Bill shows little understanding of the nature and purpose of Higher Education and risks damaging the reputation and autonomy of our universities.

In future, if a Minister invites comments on a consultation document, he might be well advised to take notice of the responses, to avoid the kind of embarrassment that Johnson is now confronted with.