Ross McKibbin Advises Opposing Marketeers on Their Own Ground 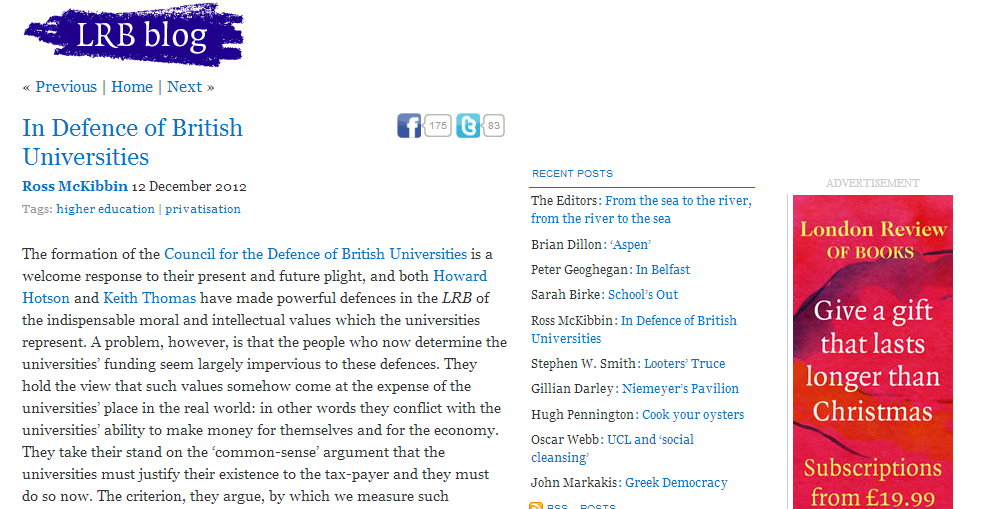 One of the leading historians of twentieth-century Britain, Dr Ross McKibbin of St John’s College Oxford, has greeted the foundation of the CDBU  with an insightful piece ‘In Defence of British Universities’ in the London Review of Books. Those who would defend universities, he argues, must be ‘prepared to meet those who today make funding policy on their own ground’ by providing a more realistic account of the roles universities play in a market economy.’

No brief summary can do his argument justice, but the following extracts illustrate aspects of this approach:

One of the more surprising things about a government that boasts of Britain’s ‘soft power’ is its refusal to admit that Britain’s universities are, along with Rolls Royce and the pharmaceutical companies (both of which have been very well served by the universities), probably its most internationally competitive ‘industry’…. An economically rational government would exploit the international competitiveness of the universities by allowing them to charge variable fees for non-British students and by making it much easier for non-EU students to get visas….

The question that future historians will find most interesting is why a political class should have set about wrecking a university system which by any criterion (including money) has been outstandingly successful…. If there is no change to government policy the decline of the British universities will be slow but inexorable; and one thing historical experience tells us is that when a university system falls it can never be rebuilt.