Guest post by Gill Evans, Professor Emeritus of Medieval Theology and Intellectual History at the University of Cambridge

History demonstrates a longstanding need for vigilance about the creeping powers of Secretaries of State and the enthusiasm of Governments for greater state control. Since early in the twentieth century two important protections had maintained a balance. First, the Haldane Principle – the notion that “decisions about what to spend research funds on should be made by researchers rather than politicians”, and second, the autonomy of universities. Replacing public funding of teaching by tuition fees and reorganising the public funding of research now throws this tested machinery into question.

Last week saw publication of the White Paper Success as a Knowledge Economy, rapidly followed by the Higher Education and Research Bill, the most comprehensive piece of higher education legislation since the Further and Higher Education Act 1992. This proposes a radical reduction of the numbers of ‘sector bodies’. How direct may future Government interference be, with the new or continuing ‘sector bodies’ and with institutions themselves?

The ‘Government bodies’ which are to be rearranged for merger are untidily clustered in two ways in the White Paper, as shown in Figure 1. There are to be two new statutory bodies, the Office for Students (OfS) and a single research funding body, UK Research and Innovation (UKRI). 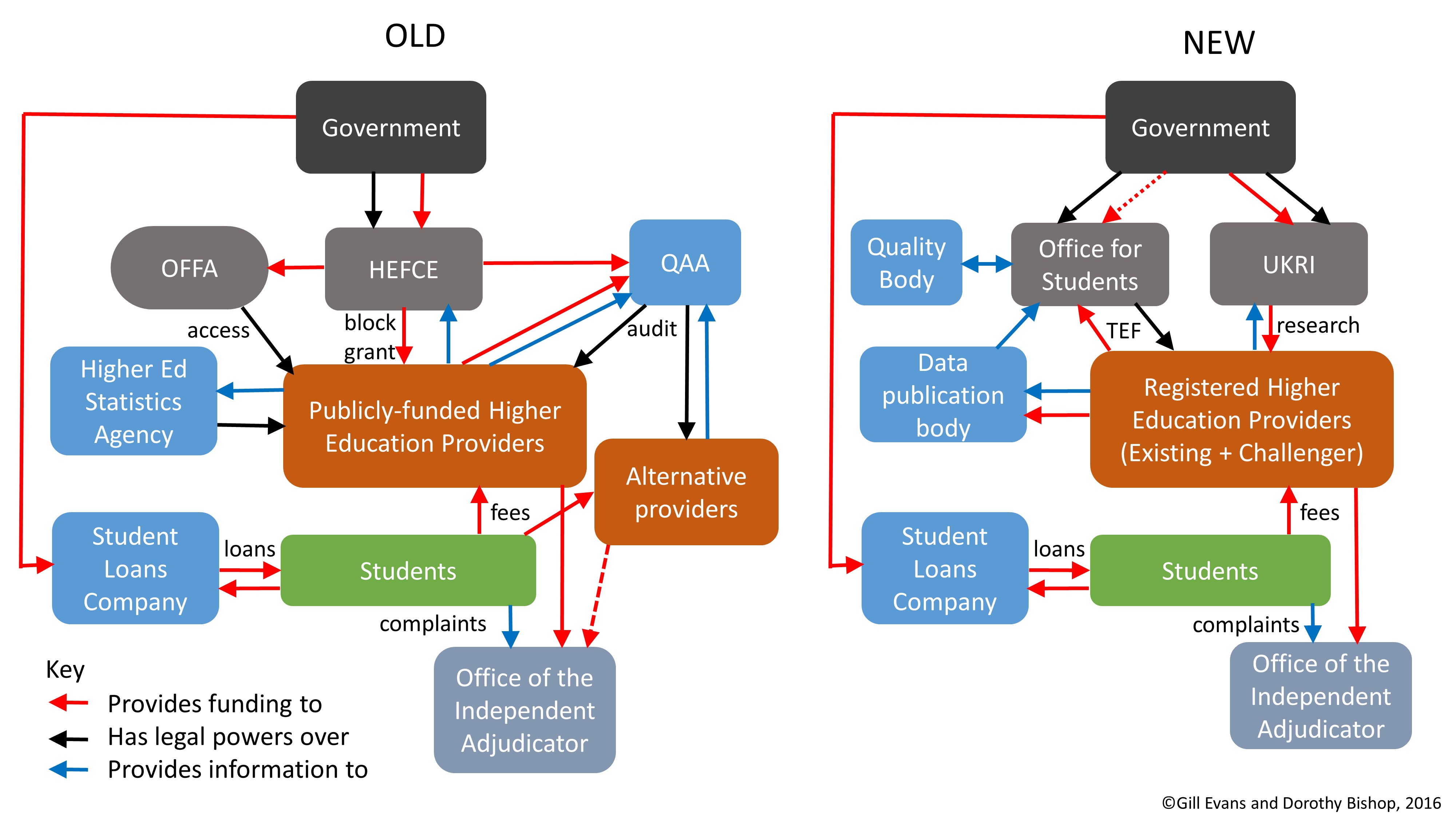 England separated from rest of UK

Most of the changes proposed in the Higher Education and Research Bill 2016 affect England and its Funding Council (HEFCE) only. HEFCE was one of four UK Funding Councils created by the Further and Higher Education Act 1992 (FHEA) to act as ‘Haldane buffers’ between Government and universities, carrying on the separation which had been provided by the University Grants Committee for most of the twentieth century. Changes mainly affecting HEFCE alone will increase the divergences which have already arisen in higher education provision in UK in the devolved administrations.

This partly reflects the consequences of the decision of 2004 to allow institutions with only taught degree-awarding powers to gain ‘university title’ (in England and Wales though not in Scotland or Northern Ireland). A result has been that most of the English new universities and all the alternative providers so far have offered only taught degrees. Government seems to be framing the new policy primarily for students at these providers.

No provision is made in the Bill to meet the infrastructure funding needs which serve both teaching and research, such as libraries and laboratories. The Bill merely provides for ‘cooperation and information sharing between OfS and UKRI’ (s. 103).

The mechanisms set out in the Bill establish UKRI (s. 83) and its Councils (s. 84). UKRI will have 9 ‘sub-sections’ (see Figure 2). To the former seven Research Councils (now to become mere ‘committees’) are added Innovate UK and Research England. Innovate UK (formerly the Technology Strategy Board, an executive non-departmental public body (NDPB) sponsored by BIS), is a relative a newcomer among the recognised ‘sector bodies’. Research England is new, taking over the research funding role of HEFCE, that is, for infrastructure funding. The future of the REF remains to be seen. No method of allocation to protect the proportions of dual funding (infrastructure and project) is identified except the Secretary of State’s annual Grant Letter to UKRI. 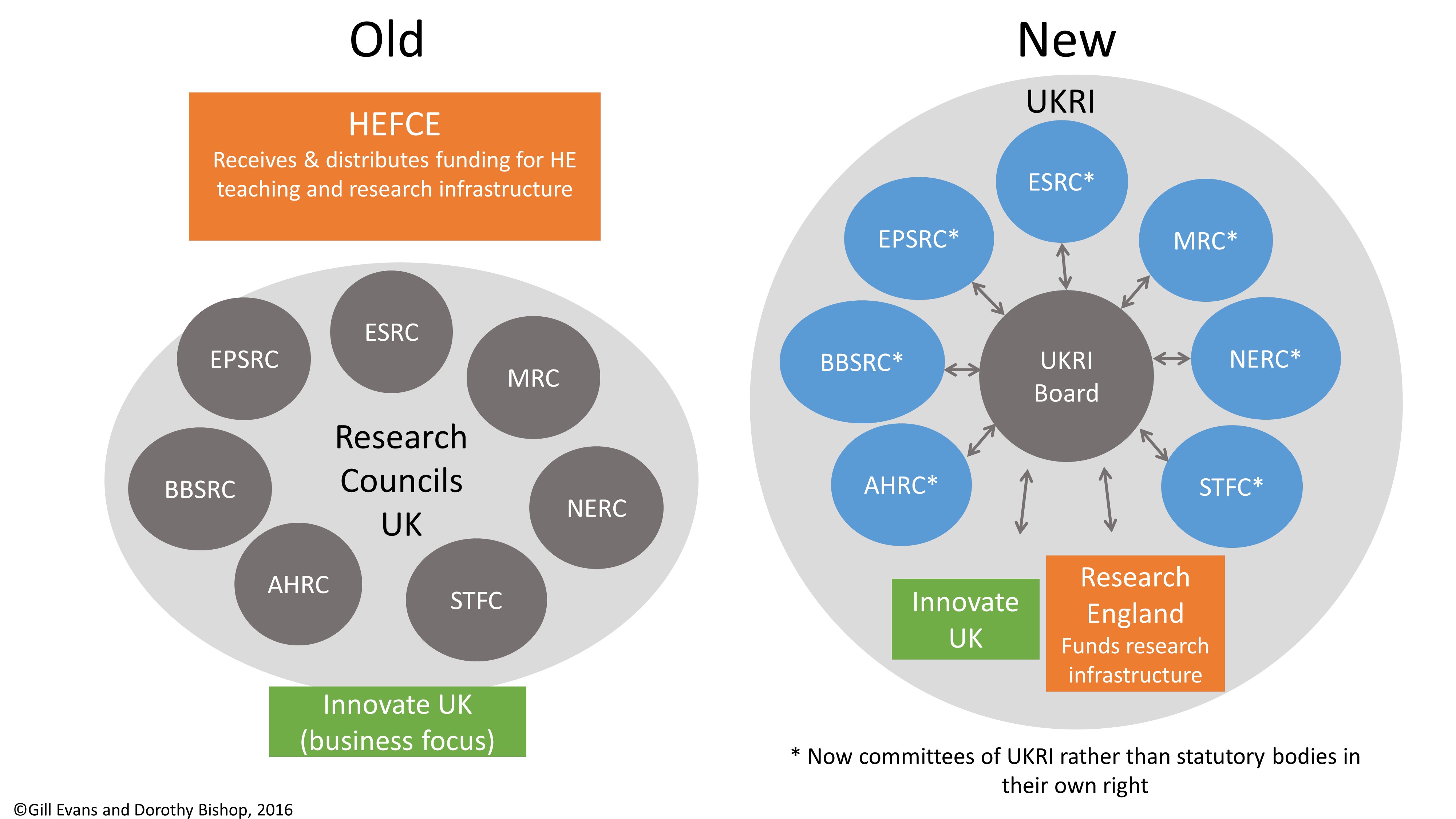 The White Paper’s proposed detailed arrangements for UKRI suggest a degree of strengthened Government control. The nine ‘committees’ within UKRI will have only ‘delegated autonomy and authority’. The Secretary of State will ‘set budgets for each’ through the ‘annual grant letter’ to UKRI thus remaining free in principle to support one area of research more generously than another. The Secretary of State may ‘by regulations’ (statutory instruments) add to or remove any of the ‘committees’ or change its name, except Innovate UK and Research England ( s. 84 (2) ).

On the ‘teaching’ side of higher education, an Office for Students is to be created, merging the Office for Fair Access (OFFA) and HEFCE, which will both disappear (ss.73 and 74). In the White Paper this is described as ‘a consumer focused market regulator with new statutory powers’. The Bill creates the OfS as a body corporate (s.1 (1)). Its members are to be its Chair, its Chief Executive, the new Director for Fair Access and Participation, and between seven and twelve other members to be appointed by the Secretary of State (Schedule 1 (2) ). The detailed requirements are much more prescriptive than those describing the role of the Secretary of State in the initial and continuing appointment of the Boards of the Funding Councils in Schedule 1 of the FHEA.

Mentions of the Haldane Principle in the White Paper and the Bill are limited to research funding. Nothing is said about the future of the hard-won principle in FHEA 1992 s.68 that the Secretary of State may not set terms and conditions for teaching arrangements in relation to public funding (‘grants’):

“framed by reference to particular courses of study or programmes of research (including the contents of such courses or programmes and the manner in which they are taught, supervised or assessed) or to the criteria for the selection and appointment of academic staff and for the admission of students.”

At s. 2 (2) (2) the Bill states that the OfS must have regard more broadly in discharging its functions to guidance given to it by the Secretary of State. At s.2 (2) (3) ‘the guidance may, in particular, be framed by reference to particular courses of study’.

The Bill contains a rough paraphrase of the points in FHEA 1992 s.68 seeking to limit intrusion into academic decision-making on such matters, identified as having ‘regard to the need to protect academic freedom’. ‘Academic freedom’ is further defined in the Bill at s.14 (7) in the list of ‘public interest governance conditions’. This merely repeats wording from Education Reform Act 1988 s.202.  That was an employment protection, and does not include the phrase ‘academic freedom’. The intention appears to be to extend a protection formerly limited to academic staff at pre-1992 universities to all ‘academic staff at an English higher education provider’. It does not make it clear whether it is to apply to the senior managers, computing staff and librarians currently sharing this protection as ‘academic-related’ staff. It still leaves English law without any formal definition of ‘academic freedom’ except perhaps as set out in the list to be found at s.14 (7) of the new Bill.

Risks to the reputation of UK Higher Education

One of the most important areas affected by the Bill will be the future of Quality Assurance, because the protection of the reputation of UK HE seems likely to be put a risk by the proposed changes to the requirements for entry to the sector. In 2014 the HEFCE Board initiated a ‘review’ of Quality Assessment, notionally in collaboration with the Welsh and Northern Irish Funding Councils.  The statutory authority on which it relied for doing so was FHEA s.70, under which it was required to ‘secure’ that ‘provision was made’ for ‘assessing the quality of education provided’ in publicly-funded or potentially publicly-funded institutions and to establish a Quality Assessment Committee to advise it on the discharge of this duty.

In the course of its review, HEFCE identified six separate ‘quality assessment’ tasks, not all uncontroversially covered by its statutory ‘quality assessment’ duty, and put out a call for tenders, actively seeking new commercial providers. On the Friday before the publication of the White Paper on Monday 16 May 2016, HEFCE announced the ‘preferred bidders’ and it appeared that the Quality Assurance Agency (QAA) had been successful in the four tenders which covered the bulk of its existing work.

On the face of it this appeared an embarrassing outcome for HEFCE, days before its dissolution was formally to be announced in the White Paper. But the proposed changes now published leave a number of questions unresolved about the extent of Government control over the profoundly important academic questions arising. Both s.24 and Schedule 1 of the Bill require OfS to establish a Quality Assessment Committee. New in s.25 is the OfS power to ‘make arrangements for a scheme to give’ quality and standards ‘ratings’ to providers if they apply for them. There is provision for the designation of a body to perform the new ‘quality assessment functions’, but it appears to exercise only delegated powers, for ‘the function does not cease to be exercisable by the OfS (s. 26 (3)’. Schedule 4 sets out the process of designation of the body by the Secretary of State in more detail. Once a body has been designated, it will gain a statutory duty to design and operate the quality assessment system, reporting to the OfS, but the Secretary of State may subsequently remove the designation.

An important aspect of the work carried out by the QAA under the previous legislative provisions was to conduct an advisory and scrutiny process for applicants for degree-awarding powers and university title, overseen by its Advisory Committee on Degree Awarding Powers, and preparatory to making recommendations to the Privy Council. The HE Bill devotes ss. 40-50 to the grant of degree-awarding powers and ss. 51-5 to authorisation to use university title. Both move from the Privy Council to OfS and it is not clear whether the designated quality assessment body is to continue to have a role in any process of preliminary assessment of suitability for either.  The White Paper’s comment that “a sector-owned quality body may be designated to carry out certain functions” (p. 28) seems unclear in the extreme.

The QAA is to retain responsibility for ‘unsatisfactory quality investigations’ and its method has hitherto been to seek to help failing institutions mend their ways. HEFCE too, until very recently, took a ‘light touch’ approach, developed in recent years, which concentrated on supporting a failing institution to mend its ways and do better. The closeness of OfS supervision is to vary from institution to institution as seems to be needed but ‘the OfS will have the powers to intervene rapidly if it has reason to believe that quality in any institution is failing’.  This wording hints at a change of expectation. The new policy is not to seek to avoid ‘provider exit’ but to regard it, robustly, as a good thing if it clears the way for new ‘challenger providers’ to enter.

Who will be in charge?

The numerous decisions to be taken by and powers to be exercised by the Secretary of State will fall in practice to the Minister for Higher Education as long as such a Minister exists. In reality they are likely to fall to civil servants. The Carltona doctrine can still allow civil servants to make decisions as though they were themselves the Ministers who hold the actual powers to do so (Carltona Ltd -v- Commissioners of Works CA [1943] 2 All ER 560).

This blogpost summarises a more detailed analysis of the Higher Education and Research Bill and its implications, which can be downloaded here.