by Dorothy Bishop and Rowan Tomlinson

In a lecture delivered at the University of West London on 7th July, Professor Roger Brown drew some important lessons for Higher Education from an analysis of economic inequality.

First, he established that economic inequality was greater in the US and UK than in many other OECD countries, and was continuing to rise. The evidence was summarised in Figure 1, using the Gini coefficient (which ranges from 1 – if all the income from a country went to one person – to zero – if everyone got the same). 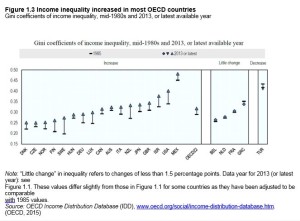 He went on to consider a range of reasons that have been proposed to explain rising inequality: these included globalisation leading to an increased labour pool, technological change reducing demand for less skilled workers, and the shift of economies from manufacturing to services, especially financial services. In addition, there are economic pressures that lead to the rich getting richer and the poor getting poorer – to some extent these are inherent in capitalism. Brown suggests that all these factors have played a part in determining inequality in major Western countries. There is, though, variation in economic inequality, and, strikingly, the highest level of inequality is found in those countries that have actively pursued neoliberal policies. These countries have prioritised freer markets, smaller government and lower taxes, and adopted macroeconomic policies that have reduced regulation and allowed international commercial banking to play a larger role in global finance.

Brown then asks how this scenario has played out in Higher Education. A university education provides benefits to society and the individual that go far beyond the economic (and beyond the crudely measurable). Yet the neoliberal approach tends to look solely at financial aspects, treating a University as akin to a factory, where an education is the product that consumers will buy because it gives them a financial advantage. And in financial terms, this amounts to a ‘winner-takes-all’ market, where the most highly educated at the top institutions benefit the most, and those who fail to get on the lowest rung of the higher education ladder have little opportunity to advance.

Brown notes how the neoliberal agenda stokes competition, where Higher Education Institutions compete for resources and funds, citing Winston (1999): “..the players become trapped in a sort of upward spiral, an arms race, seeking relative position” (p.30). As the institutions become increasingly stratified, we start to see socio-economic stratification of the students they recruit.

Brown urges us to resist this trend, and, more significantly still, he has several suggestions that could readily be adopted. These include two practical measures:

We might add to this, limit the remuneration of vice-chancellors to be pegged as some multiplier of the pay level of the lowest-paid employee: a cap on excessive salaries of VCs might deter those applicants for these key posts who see a University as no more than a business. And oppose the government’s removal of maintenance grants, announced in the Budget, which is surely a vocal marker of their lack of commitment to higher education as a public good, accessible to students from all backgrounds. It should be noted here that while the supposedly ‘hard left’ Labour leadership candidate Jeremy Corbyn has proposed removing tuition fees, when asked at a recent Labour hustings which parts of the Budget they supported and which they opposed none of the four candidates – Corbyn included – mentioned this historic, demoralizing removal of support for students from under-privileged backgrounds.

This summary represents just a small part of the arguments put forward in Brown’s speech, but we hope this has whetted your appetite. The full text of the speech can be found here.